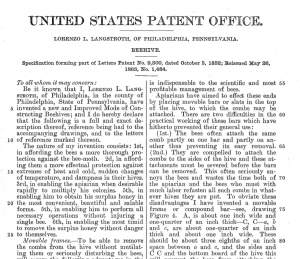 As Christmas closes in on us, beekeepers have another reason to note December 25. It is the birthday of Rev. Lorenzo L. Langstroth.

The inventor of the Langstroth beehive, the one that most of us use, was born on Dec. 25, 1810, in Philadelphia, Penn. From his earliest days, he took an interest in insects of all kinds, but interest lay dormant as he obtained his college education at Yale. After his graduation, he was a math tutor there for a couple of years and then became an ordained minister in the Congregationalist Church. His first pastorates were in Massachusetts. There he married Anne Tucker, and they had three children.

In 1848 he moved back to Philadelphia to become a principal of a young ladies’ school, and there his interest in insects — and specifically in bees — revived.

Langstroth was meticulous and exacting in his pursuit. He read all of the latest writings on beekeeping, most of which were coming from Europe. The concept of bee space was well known there (Langstroth is often erroneously credited with having discovered it), but hives were not constructed to take full advantage of it. Langstroth did come up with the term “bee space” and set about re-thinking the design of the hive so that beekeepers could inspect the hive and extract the honey with, in his words, “enraging the bees.”

In Europe, most hives were opened from the side. Langstroth combined the concept of bee space in a hive that could be opened from the top. In that way, the frames could be pried loose one at a time and taken out of the hive. This allowed the beekeeper to more easily manage the hive — to check for problems, the prevent swarming, to replace a queen, and most of all, to extract honey. Langstroth knew what all of us beekeepers have come to know: bees spend most of their energy making comb. If the comb and be preserved and re-used, the amount of honey the bees will produce increases.

Langstroth applied for a patent for his hives in 1852. His description of the Langstroth hive makes fascinating reading.

But Langstroth never made any money off his invention. Instead, he became involved in a number of lawsuits trying to defend his patent from predators. His invention was quickly adopted by many beekeepers, and because North America is an ideal place for honeybees, the industry of beekeeping and producing honey quickly expanded.

Langstroth set down his observations about beekeeping in an 1853 book now known as The Hive and the Honey-Bee.

My wife recently gave me a copy of this book (which is still in print after more than 150 years) for our anniversary, and I was astonished by what I found when I sat down and started reading it. It is written in simple, straightforward language and so full of practical, modern advice that it is quickly becoming my favorite beekeeping book.

In the coming weeks, I plan to write some more about what I am finding out by reading Langstroth.

The reverend moved to Oxford, Ohio in 1858 and continued keeping bees. He became an advocate of using Italian bees, rather than the more popular European bees because of their productivity. He and his son made a profitable business out of selling Italian queens.

Langstroth lived on 10 acres in Oxford and had much of it planted with Linden and apple trees. He also sowed buckwheat and clover and filled his formal garden with bee-friendly flowers. He lived in Oxford for nearly 20 years before moving to Dayton to live with his daughter. He died in 1895 on a Sunday morning when he was about to deliver a sermon at the Wayne Avenue Presbyterian Church in Dayton.