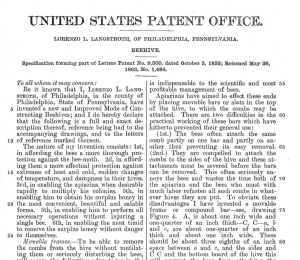 As Christmas closes in on us, beekeepers have another reason to note December 25. It is the birthday of Rev. Lorenzo L. Langstroth.

The inventor of the Langstroth beehive, the one that most of us use, was born on Dec. 25, 1810, in Philadelphia, Penn. From his earliest days, he took an interest in insects of all kinds, but interest lay dormant as he obtained his college education at Yale. After his graduation, he was a math tutor there for a couple of years and then became an ordained minister in the Congregationalist Church. His first pastorates were in Massachusetts. There he married Anne Tucker, and they had three children.

In 1848 he moved back to Philadelphia to become a principal of a young ladies’ school, and there his interest in insects — and specifically in bees — revived.

Langstroth was meticulous and exacting in his pursuit. He read all…